February 8, 2020
We will have a Member’s Trunk Show! Bring an art quilt from the past that current members may not have seen and talk about it. We have new members, so even a more current quilt would be great.

February 2016- Mask Challenge reveal and discussion of techniques, meetings for next year planned with members

Location: Buker Community Center, 22 Armory Street, Augusta, Maine (see map below) Directions: Maine Turnpike Exit 109 A, (ME 17/ ME 100/ US 202/ western Ave.) turn right towards Augusta on Western Ave. Turn right on Armory St (.6 mile). Buker Community Center is immediately on right. the parking lot may be full at times because of other activities at the center, parking is permitted around the entire building (bring a rolling cart for ease). Enter through the front entrance.

Meetings are scheduled at 9:30 a.m. to 1:30,  the second Saturday of alternating months, beginning with October.  Buker Community Center, Augusta Maine

All are welcome to join the group at any time. 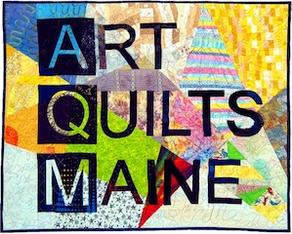